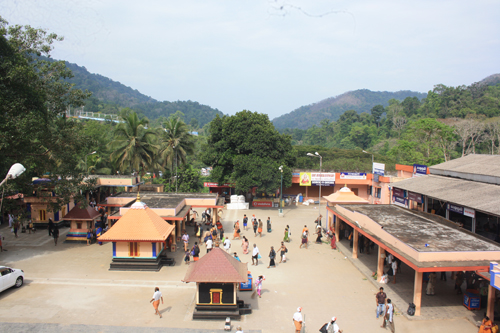 Pampa Ganapathy Temple, also known as Pampa Ganapati Kovil, is dedicated to Lord Ganesha. This is the first temple and holy spot on the way from Pamba to Sannidanam. Prayers are offered here for a safe trek to Sannidanam.

The main offering at Pampa Ganapathi Temple is coconut. Devotees break a coconut here before climbing the mountain. Devotees visiting the Ayyappa Temple should carry an extra coconut to break it at this shrine.

The river bank or arat kadavu in front of the Ganapathi Temple at Pampa is the spot where the utsava murti of Ayyappa from Sannidanam is taken for ceremonial purification at the end of 10-day Sabarimala Ayyappa Temple festival (March – April).

On the same day after the purification ritual, the utsava murti or procession idol of Lord Ayyappa is taken to the namaskara mandapam of the Pampa Ganapathi Temple to enable devotees to offer nirapara.

The main Prasadam at the temple is modakam – sweet ball – Modakam can be purchased from the counter near the Ganapathy temple at Pamp.

The temple is open on all days unlike Sabarimala AyyappaTemple which is open only during Madala kalam and during for monthly puja.