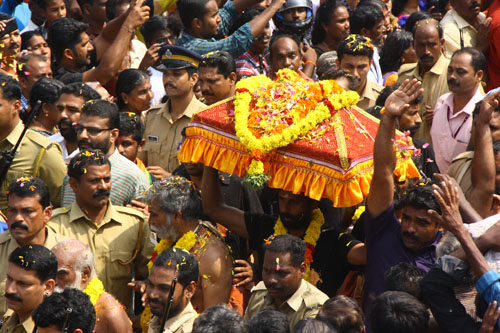 Makaravilakku marks the grand finale of the two-month period of the Sabarimala pilgrimage. This follows the arrival of 'Thiruvabharanam'  from Pandalam to Sannidhanam.

Three days prior to this , the procession carrying the holy caskets containing the sacred ornaments , as also other relics and paraphernalia needed for special poojas at Sabarimala , starts on its long trek from Pandalam. A scion of the Pandalam royal family , chosen and blessed by the Valiya Thampuran (Senior Raja) accompanies the procession in a palanquin (pallakku).

On 28th Dhanu (around 12th January), the day the procession is to start, at 4 in the morning , the holy boxes are taken from Srampickal palace and moved to the temple for viewing and worship. 'Darshan' of the Ornaments and rendering of offerings to them on this occasion are believed to be highly auspicious and beneficial.

Thousands queue by the sacred pieces now. At around 1 o'clock in the afternoon , a brahminy kite (popularly known as 'krishnapparunthu') is sighted circling majestically far above the temple. Devotees believe that this is Lord Vishnu upon 'Garuda' accompanying the Thiruvabharanam from Pandalam through Sabarimala where again the kite is found hovering above the temple synchronizing with the arrival of the procession there. The chanting of the Lord's name rises to a thunderous crescendo at the sight of the kite and deafening explosions of crackers rend the air. The Boxes are closed and taken out of the temple by specially deputed bearers.

The ValiyaThampuran has already arrived in royal style from his Palace to the temple and is by now inside the temple to offer 'vibhuthy' to the members of the procession as also to his nephew whom he has chosen to escort the Thiruvabharanam. The delegation of authority and responsibility by the Senior Raja to his representative is symbolized 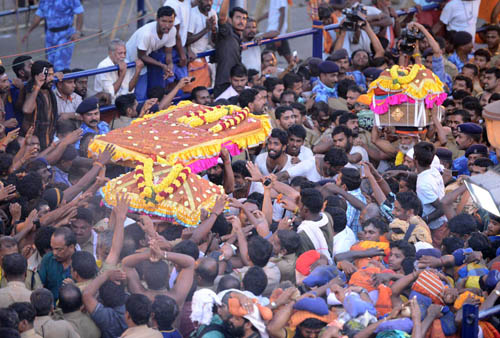 by the former handing over a sword to the latter.

The procession is now ready to start. The frenzied movements of the bearers of the boxes, the rising tempo of the devotees chanting 'Swamiye-Ayyappo', the exploding fireworks, The Pandalam Raja accompanying the Thiruvabharanam in his palanquin, the infectious excitement of the surging crowds and the seemingly unperturbed hovering of the 'krishnapparunthu' far above-all make up an indescribably magnificent moment when the journey starts for the distant hill shrine, marking the fulfillment of a vow, the consummation of a dream, the vindication of a faith.

The procession takes the age-old route through village roads, across rivers and up and down hills. The Raja (Thampuran) and other members are accorded reception at various places by various devotee-groups, including tribals. All through the procession , people in large numbers pay their respects to the Raja and receive 'vibhuthy' from him. After scheduled halts at Ayroor-Puthiyukavu and Laha, the procession reaches Valiyanavattom(Pampa) on the 3rd day(1st Makaram). From there the Thiruvabharanam proceeds through the traditional forest route to Saramkuthi while the Thampuran (Raja) and his aides go to the Rajamandapam near the Pampa Ganapathy temple and stay there.

After the Makaravilakku , the Sabarimala temple is closed for the season on the morning of 7th Makaram. Immediately the return journey commences. The first overnight halt is at Laha. The second day the procession reaches Perunadhu Temple. This is the temple constructed by the Raja of Pandalam .

Staying at Perunadhu the Raja personally supervised the construction of the Sabarimala temple. The Ayyappa deity in this temple is also adorned with the holy ornaments. Thousands , especially women queue up to have the 'darshan' and to obtain 'vibhuthy' from the Raja of Pandalam . On 9th Makaram, the procession moves to Aranmula Kottaram (Palace) and halts there. On the 10th Makaram around 8 am, the holy journey reaches back in Pandalam.