Vavar (pronounced Vaa-var), also known as Vavaruswami was a Muslim saint who became a devotee of Lord Ayyappa. There is a shrine dedicated to Vavaruswami at Sabarimala, as well as Vavaruswami’s mosque at Erumeli next to Erumeli Sastha temple. The devotion of Vavaruswami to Ayyappan and the key role that the Islamic Masjid has in the Ayyappa Pilgrimage, highlights the communal harmony in Kerala. The devotion of Vavaruswami also highlights the relevance of Ayyappa devotion for members of all faiths, and the equality shown to all, whether they are Muslims, Hindus or Christians. 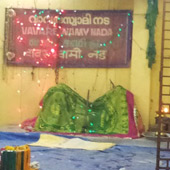