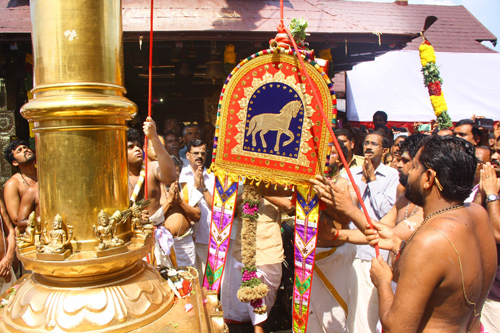 ‘Ulsavam’ is the annual festival held at Sabarimala temple during the Malayalam month of ‘Meenam’ or the Tamil month of ‘Panguni’  (March-April). The temple remains open for a period of 10 days during the ‘Ulsavam’.

‘Ulsavam’ begins with the hoisting of the temple flag, ‘Kodiyettam’. Over the course of the next days, several special poojas including ‘Ulsavabali’ and ‘Sree Bhootha Bali’ are conducted. The 9th day of the annual festival marks ‘Pallivetta’ , wherein Sree Ayyappa goes on a ceremonial procession to perform the royal hunt at Saramkuthi. This is followed by the Sabarimala ‘Arattu’ or holy dip at the Pampa river.

Special poojas to mark ‘Panguni Uthram’ draws the annual ‘Ulsavam’ to a close. ‘Uthram’ is the birth star of Sree Ayyappan.