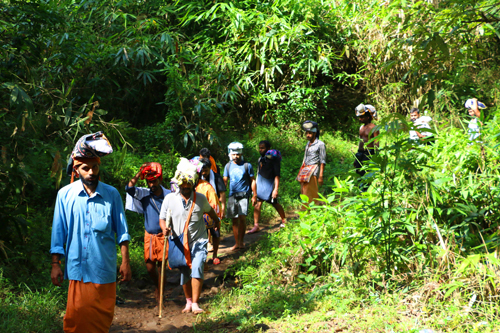 There are several routes to reach Sabarimala including Erumeli route, Vandiperiyar route and the Chalakayam route.

The route via Erumeli is considered the traditional path as it is held that Ayyappan took this route to subdue Mahishi. It is also the toughest of the lot, requiring a trek of about 61 km through forest and hill tracks.

Devotees taking the Erumeli route pass through a series of spots before they reach Sabarimala. The journey starts with offering prayers at the shrines of Dharma Sastha and Vavar Swami at Erumeli.

About 4 km from Erumeli is Perur Thodu, a place where Ayyappa is believed to have rested during his expedition. This place is also important as it marks the start of the ascent/climb to Sabarimala. As a practice, pilgirms give alms seeking asylum in Ayyappa. The forest beyond Perur Thodu is known as 'Poongavanam' meaning 'Ayyappa's garden.

The next spot in the traditional path is Kaalaketti, about 10 km from Perur Thodu. 'Kaala' in Malayalam means ox and 'ketti' is tying. It is believed that Lord Shiva tied his ox here and witness Ayyappa slaying the Mahishi. Pilgrims offer prayers in the shrine here, lighting camphor and breaking coconuts.

About 2 km from Kaalaketti is Azhutha river, a tributary of the river Pampa. Pilgrims make it a point to collect pebbles from the Azhutha river before proceeding on to the steep Azhutha hill. The 2-km steep hilly terrain is considered very tough, making in one weep and cry. Kallidumkunnu rests at the summit of Azhutha. At this step pilgrims throw the pebbles down, commemorating the act of flinging down Mahishi's mortal remains.

Inchipparakota marks the descent of journey after successfully navigating the uphill terrain. At Inchipparakota, there is shrine dedicated to Sastha known as Kotayil Sastha, where pilgrims offer their respects. The descent across the slippery path ends at Karimala thodu (canal) flanked by the Azhutha hill on one side and the Karimala hill on the other.

Karimala is the grooming ground of elephants and the pachyderms visit the Karimala canal to drink water. To protect themselves from the chilly weather and animal invasion, pilgrims set up campfires. Karimala is a hill with seven levels and the journey is undertook in stages. The 5 km ascent is very difficult and devotees course this leg of journey chanting ‘Swamiye Saranam Ayyappa’. The flat terrain on top of the Karimala hill offers scope for rest. The 'Nazhikkinar', well within a well in this place has fresh spring water, quenching thirsts and tiredness after the steep climb. At this spot prayers are offered to various deities including 'Karimalanthan', 'Kochu Kadutha Swami' and Bhagawathi. 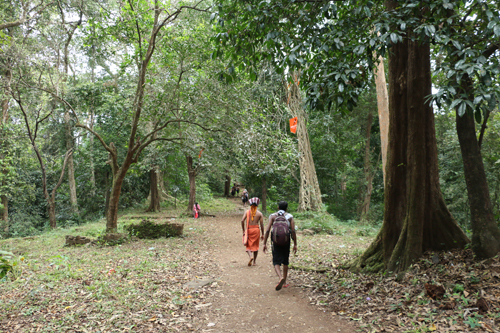 After an exhausting descent of 5 km covering spots such as Valiyaanavattam and Cheriyaanavattam, one reaches the Pampa river. The significance of Pampa in the Sabarimala pilgrimage also draws from the belief that King Rajasekhara of Pandalam found infant Ayyappa here. Considered as holy as the Ganges, worshippers believe that the water purifies one from curse and evil. The Sannidhanam (the spot of the sanctum sanctorum) is around 8 km from the Pampa river valley. Neelimala, Appachimedu, Sabareepeedom and Saramkuthi are some of the spots enroute.

It is interesting to note that ascent and descents of the journey teach one to recognise that life is all about ups and downs, and one has to brave it all to reach the summit!