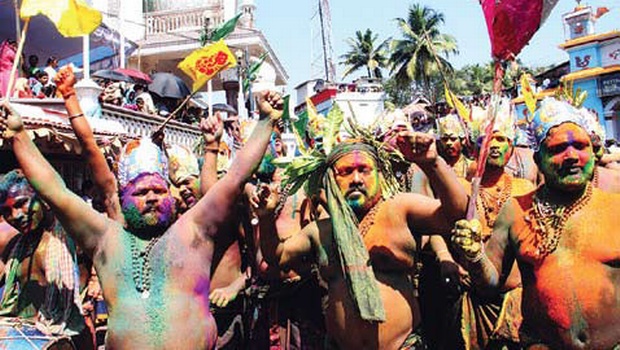 Petta Thullal, the ritualistic sacred dance to celebrate the victory of good over evil in the legend of Lord Ayyappa who killed the demon princess Mahishi, which denotes the beginning of the last leg of the annual Sabarimala pilgrimage season.
Petta Thullal will be started first by the Ambalappuzha team .

The team comprising more than a 1,000 devotees starts the ritualistic dance after sighting the kite in the skies around noon from the Kochambalam at Petta junction. The team will dance its way into the Nainar mosque across the road to pay obeisance to Lord Ayyappa’s trusted lieutenant, Vavar.

They will be formally received by the Erumeli Mahallu Jamaat committee leaders who later would accompany them to the Sree Dharma Sastha Temple (Valiambalam) nearly a kilometre away where the Ambalappuzha team and the Jamaat leaders would be received by the Travancore Devaswom Board officials.
The ceremonial dance by the Alangad team begins in the afternoon after sighting the star in the daylight sky. The two teams after an overnight stay at the Valiambalam would trek to Pampa to participate in the Pampa Sadya and later in the Makaravilaku festival at the Sannidhanam.