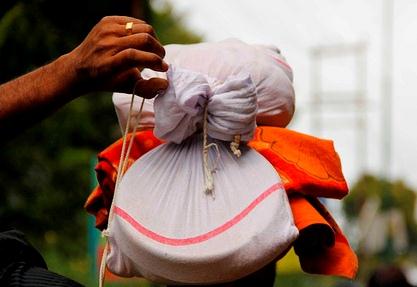 This ritual is the preparation and packing of “Erumudi kettu” for Sabarimala pilgrimage. It is prepared under the guidance of a guru swamy Only those who carry the Irumudikettu on the head would be allowed to climb the 18 sacred steps to the temple, as they are the ones considered to have observed the austerities and thus eligible to climb the holy steps.

Other devotees have to resort to a different passage to reach in front of the sanctum sanctorum for worship.

During the Kettunira, after the initial prayers, the sacred offering of ghee (clarified cow’s butter) is filled inside a coconut, the fibrous covering of which is removed.

The draining of the water within the coconut through a small hole on the top and filling it with ghee is a symbolic act. It signifies the draining out of worldly attachments from the mind and filling it with spiritual aspirations. Coconut is called “Thenga” in Malayalam and now the ghee-filled coconut, an offering for Lord Ayyappa, is known as the Nei-thenga.