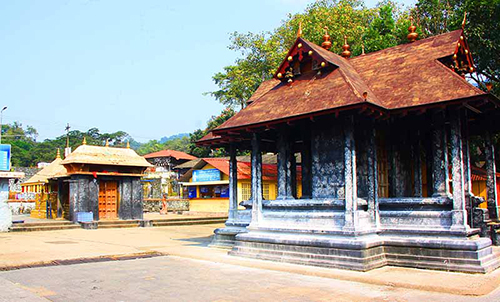 The Pandalam Raja admitted Ayyappa in this school to study Martial arts (Kalari) from the Guru, Kalari Panicker. Leela, his daughter fell in love with the Prince. But being a Brahmachari, Ayyappa couldn’t accept her passion. But he gave her a word that, he will marry her certainly, if there is no Kanni Ayyappas at Sabarimala.

Another story related to Malikappurathamma goes like this: After Mahishi was killed, a beautiful lady appeared from the body of Mahishi. She requested Ayyappa to marry her and accept her as his soul mate. But due to his mission and the state as a Yogi, Ayyappa refused it. But due to the incessant beseech of the girl, the Lord gave her the word that he will definitely marry her at that time when there will be no Kanni Ayyappas in his abode at Sabarimala.

The main rituals at Maalikappuram temple are Pattudayada, Pottu, Chandu, Kanmashi, Vala and Bhagavati Seva. Rolling of coconuts (thengai urutt) is another major ritual which is performed in this temple. The sub deities in this temple are Nagaraja, Navagrahas, and KochuKadathuSwami. Malikappurathamma is taken from MalikapuramTemple to Saramkuthi in a pageant every year. This procession is adorned with traditional music including pandy melam. The same procession will return to Malikappuram in a silent manner which symbolizes the grief of Devi who sees thousands of arrows at Saramkuthy. This is a symbolic ritual to know whether any Kanni Ayyappas have visited to Sabarimala. After seeing thousands of arrows at Saramkuthi, the Devi sadly returns to her shrine and will wait till next season commence. The Manimandapam, where Ayyappa meditated to become the Moorthy is also situated here.

There was only a Peeda Prathishta (holy seat) at Malikappuram till the fire disaster in Sabarimala. The idol of Malikappurathamma was installed by Brahmasree Kandararu Maheswararu Thanthri. The Devi at Malikappuram holds a Sankh, Chakram and Varada Abhya Mudras. Now the idol is covered with a gold Golaka. The temple also was reconstructed in the last decade and now the conical roof and sopanam is covered with gold.